Episode 22-29 is Part 2 of a series, covering non-permissive radio operations environments and ‘when ham radio is banned’.

The following is a visual of the one-way authentication example as used in the podcast: 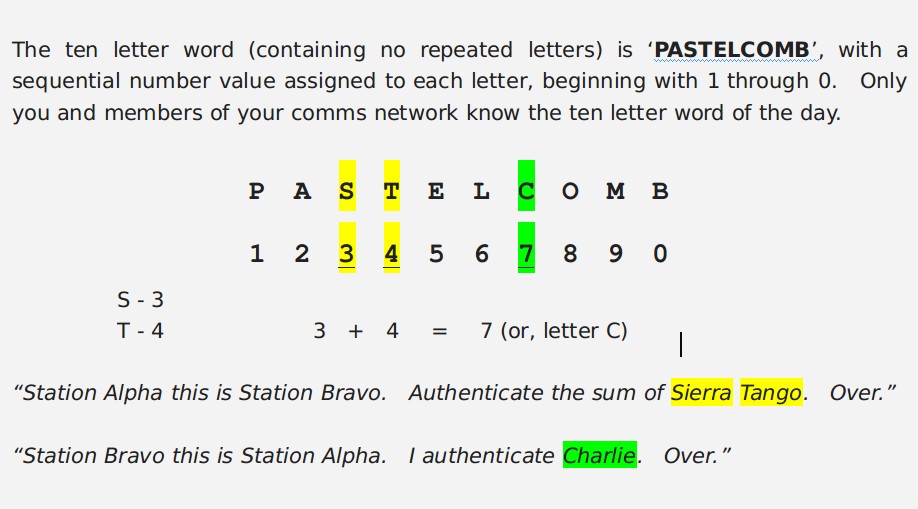 The image below (Figure 2) is an example of a ‘Dryad’, found in military CEOIs, and was used for two-way authentication and enciphering numbers.  There is VERY little information available open source (on the internet) discussing or explaining most components of a CEOI.  However, American Partisan has a series of articles for the Raspberry Pi enthusiasts, for generating tactical callsigns, dryads, and more.  Today, authentication and encryption is loaded into modern military radios, and these soldier comms skills are (were) a dying art.  We’re bringing them back. 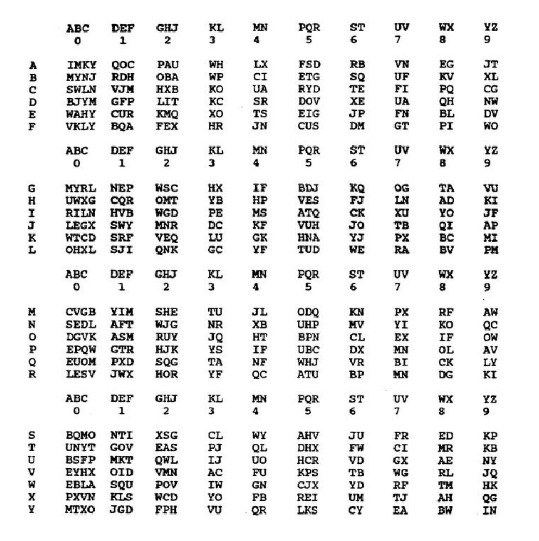 Instructions on using the dryad will not be covered here, but will be covered in the near future.

Note, it is a script for generating dryads, callsigns, etc. on a Raspberry Pi, for those of you savvy with using R-Pi.

This is based on the three-letter authentication described in the podcast, Episode 22-29.

This explains how to use PGP (Specifically GnuPG) to create small keys for low overhead.  This makes Winlink [or any file transfer protocol with FEC] messages unspoofable.  I go over the basics of using PGP in general, so it is applicable anywhere.

How long does it take to break 1024-bit encryption?  A LONG time. https://www.quora.com/How-long-does-it-take-to-break-1024-bit-encryption

Three-Character authentication allows a one-way authentication which helps receiving stations know that the message or report came from the unit believed to be the actual sending unit.  For example:

Using the above information:  If I were the RTO (radio operator) for 1st Platoon, it is the 22nd of November, and I needed to send a message to another unit who could not (or should not) transmit back to me, or was otherwise unable to perform two-way authentication with them, I would use the Day 02 authentication table, and choose an unused three-letter set.  Using the table above, I would select ‘RPW‘.  As you can see, BMK and DWK are crossed off, indicating they have already been used.  I would then strike through RPW to avoid using it again.

Tactical Callsigns change (or should) regularly.

Your unit team members’ code names (or ‘handles’) below.  These are not tactical callsigns.

Units may have code names as well.  Depending on the mission planners and/or manager responsible for generating your unit’s comms plans (SOI or CEOI), your units may be listed by name (1stPLT 2nd BN INF), or by code name (in this example, your unit is ‘PainTrain-12’)

Below is an example of how you would format the tactical callsigns for the units in your SOI/CEOI.  The example covers a three-day period so you can see the format.  An actual CEOI should cover a ten-day period, and should not be used twice other than training purposes.  The calendar date would dictate which day to use.  If your operations take place on November 2nd, or the 12th, or the 22nd, you would use Day 02.

Changing callsigns and frequencies daily denies the enemy the ability to easily determine which units are which, who is who, and who is where.

Using the data above, if I were the radio operator for 1st Platoon, 2nd Infantry Battalion, on November 22nd (as this is being written), I would refer to Day 02 in the CEOI, and use the callsign ‘D0B’, or spoken, “Delta Zero Bravo”

‘MODDING’ your radio  THIS IS STRONGLY RECOMMENDED TO DO

This subject will be explored in more detail later.  However, there are some main points know now

Modifying your transceiver (also commonly called a “MARS mod” will allow you to operate outside the allocated FCC bands/frequencies assigned for amateur radio use.