At Radio Free Redoubt, we believe in investing in the next generation.  Here’s a chance for you to win:

An official Red Ryder carbine-action 200-shot range model air rifle with a compass in the stock, and this thing which tells time!

Kids, you might need your parent’s help.  They should know how do decrypt one time pad messages, but if they don’t, click this link to go to the One Time Pad posting.

I strongly recommend you download and print the One Time Pad – A Simplified Exercise by JJS.  It will walk you through the steps for decrypting a message.

BELOW is your One Time Pad for decrypting the message for this contest.  Keep it handy! 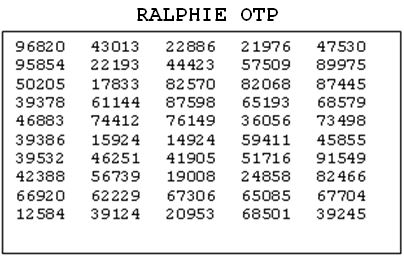 5. Email the entire decrypted message to JohnJacob@RadioFreeRedoubt.com, and type ‘RALPHIE’ in the Subject line. Remember not to use your real name.  Have an adult help you come up with a really cool Code Name.  We’ll announce the winners’ code names during the show.

7. Drawing will be held on Sunday evening, December 13th on Radio Free Redoubt, and will be repeated in Partisan Radio, Volume 28 on Monday,  December 14th.

Winners will also be notified by email.

8.  The audio file with the secret message will be uploaded here on Monday, December 7th, so you can practice all year round, even after the deadline for the contest has passed.

HAVE FUN!  And Merry Christmas!  Just don’t shoot your eye out!

Three Prizes will be awarded:

GRAND PRIZE:  From the Daisy Museum, one official Red Ryder carbine-action 200-shot range model air rifle with a compass in the stock, and this thing which tells time!

SECOND PRIZE:   The Youngest Partisan: A Young Boy Who Fought the Nazis