Resistance – an article by Ol’ Remus

I came across the link to this article at Survivalblog.  Ol’ Remus, from the Woodpile Report is one of my favorite bloggers.  I wish I could write the way he does.  But there’s only one Ol’ Remus.  In his article, titled ‘Resistance,’ he points out many considerations for survivalists and patriots to bear in mind.  With the direction our country is headed there’s a lot of talk of resistance, but armed resistance?  That can never be removed as an option, but it MUST be the last and final option, only to be used when all other means have completely exhausted themselves.  There are millions of reasons why, and Ol’ Remus points out several for the reader’s consideration.

Armed resistance should only be used when you are forced to use it.  Because once you’ve reached that point, you really have no other choice.  If it comes to that however, you better mean it if you hope to prevail.  And even if you mean it, there are steep prices that will be demanded, and patriots need to know that ahead of time.  I’m reminded of the following quote, revealing the thoughts of the oppressed in the Soviet gulags:

“And how we burned in the camps later, thinking: What would things have
been like if every Security operative, when he went out at night to make
an arrest, had been uncertain whether he would return alive and had to
say good-bye to his family? Or if, during periods of mass arrests, as
for example in Leningrad, when they arrested a quarter of the entire
city, people had not simply sat there in their lairs, paling with terror
at every bang of the downstairs door and at every step on the
staircase, but had understood they had nothing left to lose and had
boldly set up in the downstairs hall an ambush of half a dozen people
with axes, hammers, pokers, or whatever else was at hand?… The Organs
would very quickly have suffered a shortage of officers and transport
and, notwithstanding all of Stalin’s thirst, the cursed machine would
have ground to a halt! If…if…We didn’t love freedom enough. And even
more – we had no awareness of the real situation…. We purely and
simply deserved everything that happened afterward.”

When you don’t have an alternative except to “burn in the camps,” the choice is simple.  But make sure first, that you have no alternative.

In a post-collapse scenario, what would you do if   mob of violent foragers came your way? Would you and your survival group stand your ground? Would you join with other survivalist groups to face  the threat? If you did, what if your combined gardens, live stock and supplies were raided not by roaming looters but by desperate people who themselves had been looted, would you oppose them with force or accept them into your community? What if your  combined resources were “requisitioned” by  a nearby town for  The Greater Good, meaning  people who are no worse off than you? What if your firearms and ammunition were also to be ‘redistributed’? What if they intend to draft some of your people  for labor gangs or to man their defenses? Where do you draw the line?

History has seen a lot of this and it doesn’t end well.

Resistance groups in occupied Europe during the war typically began with military units which had evaded capture—unprepared survivalists with military training. They armed themselves with everything from battlefield pickups to improvised weapons, a practice continued to this day

.   They learned guerilla warfare from on-the-job training, starting with small scale ambushes and  raids on targets of opportunity for food and supplies. They weren’t  applying insurgency methods learned from  Asian gurus or 4GW, they were hunted men acting from desperation.

Their ranks quickly filled  with more escaped POWs,   men  evading slave labor roundups and  families dodging the extermination camps, nationalist patriots and the ideologically motivated, and refugee widows and children. As the partisan groups grew in size, so did their needs. It  became necessary to do more than ambush   supply convoys with small unit tactics. It became necessary to establish functioning societies,  eventually some dominated areas the size of  Denmark or Belgium and what had been small guerilla bands became an army of irregulars.

By the middle of 1943 partisan resistance to the Germans and their allies had grown from the dimensions of a mere nuisance to those of a major factor in the general situation. In many parts of occupied Europe the enemy was suffering losses at the hands of partisans that he could ill afford. By the middle of 1943 they had grown from a large number of small and loosely organized fighting groups into a powerful irregular army.

They had liberated large areas of their country. Their troops were battle-toughened and their leaders practiced in command. On five occasions the enemy had tried to annihilate them in large-scale operations; but from each of these offensives they had emerged stronger than before.

If you wish to do your own research, notable partisan and resistance groups of that era were  Tito’s Yugoslav Partisans

, the Polish Resistance during

the war, the Forest Brothers of the Baltic region

and the Warsaw Uprising by the Polish Home Army in 1944

. Be aware most of what’s written is rather self-congratulatory, mostly justified, sometimes not. We needn’t expect chivalry however, partisan battles were outright  bloodbaths, face to face murder, and not a few came to enjoy it. It’s enough to know neither side  made any provision for  prisoners.

Resistance units typically suffered crippling losses at the outset, then got the upper hand, then suffered huge losses again when  anti-partisan measures were used. Among them was the old Hollywood standby, infiltration and betrayal, actually quite  successful, as was the “honey pot” trap  seen in the classic Red Dawn movie. Popular support was  undercut by having impersonators commit atrocities, although some incidents were genuine. Public execution of captured fighters was an effective deterrent to recruitment, usually after they’d been tortured for information or for revenge. False promises of amnesty often got good results, particularly for  Soviet occupiers after the end of the war.

A significant victory for the NKVD and the newly created Polish secret police came in the second half of 1945, when they managed to convince several leaders of the AK and WiN that they truly wanted to offer amnesty to AK members. Within a few months, they managed to gain information about vast numbers of AK/WiN resources and people. Several months later when the AK and WiN leaders realized their mistake, the organization was crippled and thousands more of their members were arrested.

Some partisan groups fought their ideological enemies more than the putative enemy, others carried on long-standing  ethnic feuds at every opportunity, often to the near-neglect of all else. This included betraying enemy partisan bands to the occupation. Ethnic-tribal massacres and revenge atrocities were ongoing in Europe long before the war, particularly in central and eastern Europe. The war was partly an opportunistic remix,  a  multi-cornered civil war wrapped in a world war with all the shifting loyalties and changes of fortune one could expect 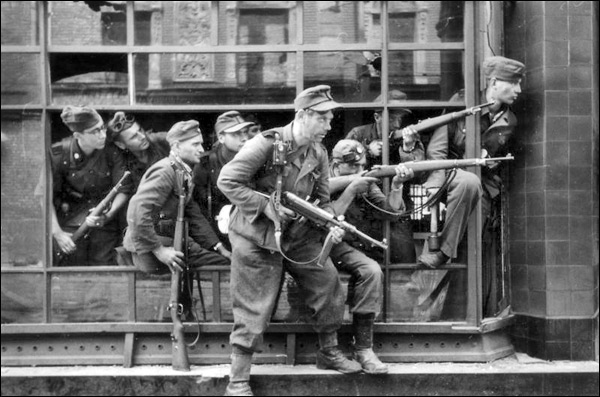 Large scale anti-partisan military action proved to be the winning method however. Whole areas of partisan operation were surrounded by  specially trained troops and the so-called Auxiliary Police, some of whom were
of the Trawniki Men

variety, others  homicidal madmen recruited from the psycho wards.  Often they had air support and light armor. Locals familiar with the area and its families  often guided the attacks, some to settle old scores, some were crass opportunists or acting under threat to themselves and their families. Contemporary accounts commonly tell of partisans taking eighty per cent casualties and more in “good tank country”. Results were significantly poorer in mountainous or forested regions, but on balance the resistance was drastically reduced, sometimes to near oblivion, if not rescued by the nearness of a  front line.

This was in a different place, a different time. We’re not  occupied by a foreign military force,  there is no liberation    army needing sabotage and intelligence gathering and no left-behind military units or escaped POWs to act as a nucleus. Nor are there air drops of supplies and weaponry from allies, or slave labor and extermination camp roundups to evade. At present, notions of an armed American resistance are founded on hyperbole or too many video games.

Read the full article, and other great musings of Ol’ Remus at:

How a Venezuelan Opposition Leader Secretly Communicates From Solitary Confinement

Looks are deceiving… and so are interpretations