John Jacob Schmidt — April 2, 2012
This is an excellent, must-read for the Redoubter, not just for the Hams and Relays in AmRRON, but for the average ‘Joe’ Redoubter who wants to stay informed and connected.  Popeye, along with several other AmRRON operators, have been working tirelessly to get the American Redoubt communications plan developed, tested and implemented.  This is just the first of several forthcoming articles from the folks that are working to ensure we stay connected and informed, not only across the American Redoubt, but across the continent.  Click HERE to join the American Redoubt Network.  If you’re a Ham operator (or even if your not) and you would like to be a Relay, you can also volunteer with the AmRRON (American Redoubt Radio Operators Network).
-John Jacob Schmidt
How to Receive Ham Radio DIGITAL Communications
by Popeye
-So Simple, Even Al Gore Could Do IT!- 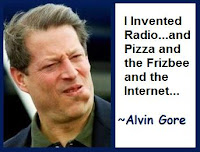 A Couple of Examples
There is a lot of talk about ham radio and it’s proven record of getting the message through, especially in areas impacted by disasters.  During Hurricane Katrina: ham radio operators were so effective at providing communications that ham radio was specifically praised in the closing report by  the U.S. Congress.  After the massive “Christmas Tsunami” that swept away entire islands throughout the south Pacific and related seas, it was ham radio operators and sailors with their radios who sent out the first reports of the massive damage and then provided long range communication to coordinate the relief supplies coming IN, because commercial infrastructure (normal power, phones and internet) had been wiped-out. Ham radio was about the only method of communication that still worked. Most of this communication was done by hams who hooked their computers to their radios.  We call this ‘digital communication’.
Why “Digital” Ham Radio?

When most people think of ham radio, they think of maybe two things: Morse code or voice, but one of the best kept secrets of ham radio is our ability to ‘talk’ keyboard-to-keyboard for hundreds or even thousands of miles over shortwave radio!  Unlike an internet chat room, hams do not require the Internet or phones to do it.  We ‘chat’ directly with each other using only our radio equipment and the Earth’s “ionosphere” that bends our radio waves back to earth many hundreds and even thousands of miles away. This type of ham technology is lumped together under the phrase: “digital modes”. When we say that we ‘work digital’ or ‘use digital modes’, it means that we talk computer to computer via radio and this is VERY helpful during an emergency when normal ‘infrastructure dependent’ communication often fails.
The main advantage of digital instead of voice is that digital cuts through noise and weak signal conditions which would prohibit a voice conversation at the same power level.  That last part is important, because in an emergency you may not have a lot of spare electrical power for high powered transmitters. In general, digital modes work when a voice signal would never get through. Morse code does this too and in some cases it does it better. However, some people are afraid that they could never learn the Morse code (not true and I’ll show you how in a later article!). So, digital modes are STRONG when the signals are weak and very little training is required to learn to use digital modes effectively ! This is why digital ham radio is so hugely popular for long range ham radio communication. 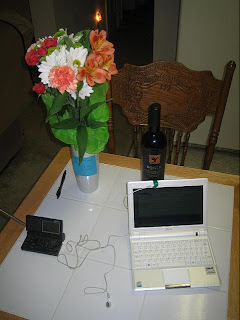 This is the ENTIRE set-up.
Of ALL the different ‘digital modes’ that hams use, the most common is called “PSK-31” or just ‘PSK’ for short.  I’m going to show you how to listen-in on hams from all over the continent and perhaps the world using this PSK mode AND I’ll show you how to do it very inexpensively. Notice in the pictures, that I am using a ‘plastic’ shortwave radio that is over 20 years old and a small ‘tired’  ‘netbook’ computer. Sure, better equipment will yield better results, but you will be SURPRISED at how effective this ‘kitchen table’ station really is!
What you need:
1.          Shortwave radio that can listen to “SSB”.
(Kaito 1103 is highly recommend for your portable/inexpensive shortwave needs!)
2.          A computer with this software :  Fldigi
(If you do not have a built-in microphone, then you can use an audio patch cable from Radio Shack to go between your radio to your computer’s microphone jack.)
3.          A set of ‘ear buds’ that work with your radio.
4.          A piece of tape approximately 3 inches long.
Let’s get started:
For this, you will need your computer booted-up, shortwave radio, capable of receiving SSB, and your ear-buds.
a.       Start the FLdigi program, select Op-Mode / PSK / BPSK-31. 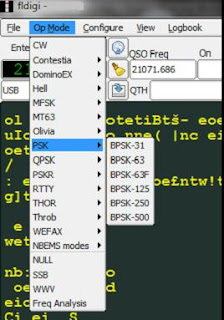 This will bring the sound of the signals from your radio to the laptop without the need for a patch cable. An electrical connection between radio and computer often causes the radio to pick-up electrical noise from the computer. By using the ear buds instead, we bring the sound from the radio to the computer without actually connecting the two electrically = much less computer electrical noise in the radio!
e.       Turn UP the volume control on the radio just enough so that you see vertical lines appear at the bottom of the Fldigi screen.  This is called ‘the waterfall’.
f.       Move the cursor over one of the signals in the waterfall (see red lines) and left click.  This will select that signal as the one you want to read. This may require some practice until you can reliably select and read signals..

g.       At this point, you should begin to see text appearing in the top (receive) window of the Fldigi software. It may be garbled at first. In which case, repeat steps e & f .

h.       So, how far can you read signals with a set-up like this?  Just as an example: from my kitchen table, using the set-up here in the pictures and 6 feet of speaker wire twisted onto the end of the radio’s whip antenna, I copied conversations from all over the USA, Cuba, Canada and even Russia and I wasn’t even on a ‘DX’ band – The frequency was not know for giving long range results – go figger!
I.       Now that you’ve learned the basics, how would you like to read more than one signal at a time? In fact this program allows you to read all the PSK signals that your receiver hears at once: here’s how.  Keep the program running just like it is when you are looking at single signals, then open “View/Signal browser”. 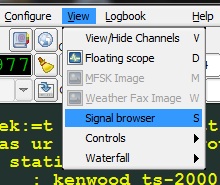 J.       It will bring up a window that will show you every copyable PSK signal that your radio hears and it looks like THIS. It may require 5- 10 seconds to begin, so do not be discouraged at first.  (The frequency displayed is not correct – disregard it.)

K.      Go Forth And Conquer!
>>>====> Be certain to read the HELP files built in to the Fldigi program!  It will teach you how to use this program to it’s fullest potential.  There are some REAL goodies in there too! For example: if you don’t have internet access to the weatherman, you can receive and read your own Marine Weather Facsimile (WEFAX) images directly off-the air.  They  look like THIS: 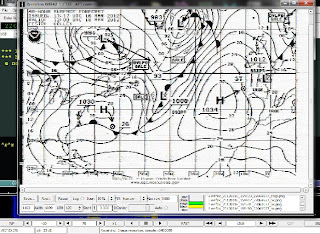 Sailors use this sort of information to know when to duck in to port, when to run & when to heave-to.
Haaaaar!