If They Can Force Us To Buy Healthcare…

… what else can they force us to buy at gunpoint? 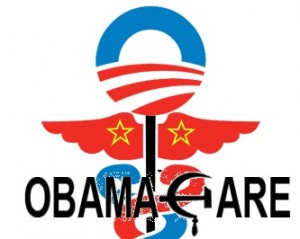 This is written as the Supreme Court is weighing the constitutionality of ObamaCare – in particular, it is considering whether the federal government has the authority under the Constitution to force people at gunpoint to buy a health insurance policy from a private, for-profit business. That this is even being discussed – as opposed to dismissed out of hand – tells us just how far down the slippery slope we’ve already slid. But what most people – especially people who support the mandate – may not have considered is where the precedent about to be established will take us.
In law, precedent is everything. Because it becomes practice.
Once a given thing is countenanced by the courts, it becomes the basis for countenancing other, similar-in-principle things.  Some 25 years ago, when the courts ruled it was within the government’s constitutional authority to stop motorists at random, without even the pretext of probable cause (as clearly demanded – without qualification – by the Fourth Amendment to the Constitution), a precedent was established. Today, we are subject to random stops – and random searches – at any time, just about. It has become a routine – and routinely accepted – practice.
If the government has the authority to force each of us to buy a health insurance policy on the basis of “interstate commerce” or some appeal to the collective greater good – then a new precedent will have been established. Why, having gone this far, stop there? Do you imagine the government will stop there?  Has it ever once, having expanded its authority, failed to expand upon that authority?
Why not also force people at gunpoint to buy life insurance?  As things stand, there are families left without a breadwinner – and the breadwinner’s income – following an untimely death. Perhaps some people cannot afford to buy life insurance.  Surely life insurance is just as vital to interstate commerce – and the “security” provided by a policy just as much a “right” as the “right” to health care? Precisely the same arguments can – and will – be used. You are a fool if you don’t see it coming. And it will not come because of the government’s concern for you. It will come because of the concern over the money (and power) to be had – the two things really driving the individual mandate of Obamacare.

Previous Article WHAT MANY CHURCHES AND THE S.P.L.C. HAVE IN COMMON