John Jacob Schmidt — February 21, 2012
email us at: johnjacob@radiofreeredoubt.com
Americanism, American Redoubt, and The Last Pilgrims
Click the Play button to listen to this episode!
http://www.podbean.com/podcast-audio-video-blog-player/mp3playerlightsmallv3.swf?audioPath=https://radiofreeredoubt.podbean.com/mf/play/a9xkj7/Episode_12_7_Americanism_AR_Last_Pilgrims_Book.mp3&autoStart=noPodcast Powered By Podbean
… OR, go to RFR’s  PODBEAN site to listen and DOWNLOAD this and all previous shows!

________________________________
ACT OF VALOR
The Movie
Watch the movie trailer at Chaplain Mick’s Blog
Also from Chaplain Mick on Twitter: Pro-Lifers Arrested For Praying in front of White House yet Occupiers Destroy Public Property
The American Redoubt Needs Your Help!
Keep checking back throughout the week on articles about how you can help!
It’s time to step up and stop watching from the sidelines.
COMMUNICATIONS UPDATE:
The American Redoubt is adopting TAPRN (The American Preppers Radio Network), often pronounced as “Tappernet,”  or APRN, for day-to-day communications and regularly scheduled weekly voice and digital nets.  It’s a great place to practice using your HF Ham equipment among Redoubters, Preppers, and other Patriots.  More info on the way this week!

AGENDA-21 UPDATES.  This United Nations encroachment strategy HAS to be fought back from our communities!  If you’ve never heard of Agenda-21, visit the Highlights & Resources Page from our broadcast Week 21 – Agenda-21: An Introduction on Radio Free Redoubt.

____________________
The Last Pilgrims
Please wait until Book Bomb Day, February 24th, to order.  We will be posting a Book Bomb Day Announcement the night before, so check RFR next Thursday, the 23rd.
Post Apocalyptic Story of Americans Struggle for Survival and Existence  After America, written by Michael Bunker, Author of Surviving Off Off Grid 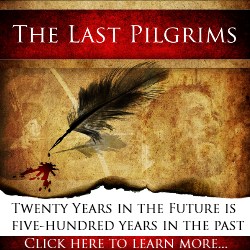 Interviewing Michael Bunker with Shannon from NourishingDays.com
____________________
HOMESCHOOLERS
& Adult Students
CONSTITUTION 101
FREE Hillsdale College Online Course
They do take donations, and the recommended donation amount is $50, but if you cannot afford that at this time, you may still take the course for free.  If you are able, ANY amount will help cover the costs to produce the course.

Course begins TODAY, Monday, February 20th, Register NOW!
____________________
By faith Noah, being divinely warned of things not yet seen, moved with godly fear, prepared an ark for the saving of his household, by which he condemned the world and became heir of the righteousness which is according to faith.
Hebrews 11:7
email us at: johnjacob@radiofreeredoubt.com