So You Say You Want a Revolution?

John Jacob Schmidt — February 9, 2012
email us at: johnjacob@radiofreeredoubt.com
Sidenote:  Beautiful quote taken from someone’s profile over at calguns.net:
“Fathom the hypocrisy of a Government that requires every Citizen to prove they are insured… but not everyone must prove they are a Citizen.”
______________________
Many years after the American Revolution, Captain Levi Preston of Danvers was asked by a young reporter, “What made you go to the Concord fight?  Was it the Stamp Act?  Was it the tea tax?”
“I never saw any stamps, and I always understood that none were ever sold.  Tea tax?  I never drank a drop of the stuff.  Besides, the boys threw it all overboard.”
“Well then, what was the matter?”
“Young man, what we meant in going after those Redcoats was this: we had always governed ourselves and we always meant to.  They didn’t mean we should.”
______________________ 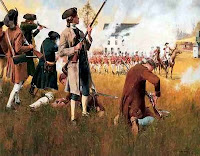 Lexington Green.  Dawn.  April 19, 1775.  Captain John Parker, commander of the Lexington militia, stood among seventy-some men, many of them kin, all of them neither rich nor poor, awaiting the arrival of the British Regulars.
Facing overwhelming odds, Captain Parker turned to his men and said, “The first man who offers to run shall be shot down.  Stand your ground!  Don’t fire until fired upon!  But if they want to have a war, let it begin here!”
Later that morning, on the training field just across the Concord River from the town of Concord, members of the colonial militia watched as smoke began to rise from the town.  Lieutenant Joseph Hosmer turned to Colonel James Barrett, overall commander of the Concord militia, and said, “Will you let them burn the town down?”  Upon hearing this, Captain Isaac Davis drew his sword and replied, “I haven’t a man who is afraid to go.”
The day’s events unfolded, and eight long, bloody years of war followed.  Although in hindsight we know the outcome of this conflict, to these men, the future was uncertain.  “Give me liberty or give me death” was more than just a saying.
For those keyboard commandos who have given up on America and are just waiting for a new American Revolutionary War to have a chance to “water the tree of liberty,” think about this: Captain Parker did not want to be there.  He did not want to see his kin slaughtered in front of him.  Neither did young Captain Davis, the first American officer killed in the Revolutionary War, want to leave his wife a widow and his children orphans.  However, they knew what the stakes were.  In fact, the last thing Captain Davis said to his wife was “Take good care of the children.”
These men had only two choices.  They could either submit to King George’s rule, or they could resist with arms.  Thankful for the choice that they made, we have been left with a third option: involvement.  The Tenth Amendment is not just about states’ rights.  It puts the ultimate authority into the hands of the people — into our hands.  Brave men died for this.
Read the full story at AmericanThinker.com
email us at: johnjacob@radiofreeredoubt.com
Post Views: 756

Next post The American Redoubt: The L.A. Times Gets it Mostly Right

Previous Article DHS at it again! ANOTHER Lexicon Defining Terrorists/Extremists