The Legacy of September 11th (by Enola Gay)

Yet another poignant and thought-provoking article from Enola Gay at ParatusFamilia blog. Proud to call her a fellow patriot and sister in Christ.
She is just one (of the many examples) of the women of the American Redoubt.

The Legacy of September 11th 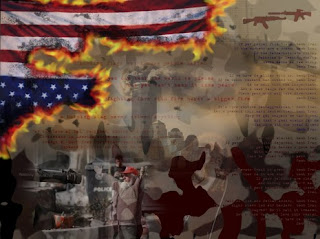 September 11, 2001 was hallmarked by great tragedy, uncompromising heroism and dauntless courage, but the ongoing legacy of 9/11 is that of tyranny and oppression.  While the citizens of this mighty republic were reduced to serfdom, the Muslim terrorist gained a great victory.

Briefly, our country united.  We were bound by the cords of tragedy and compassion.  We were shaken from our complacency. We were Americans. We were Christians.  But, our new found commonality was to be short lived.  As emotion gave way to a “higher level of understanding and tolerance”, we sought to contain the common man’s reaction.  Rather than “waking the sleeping giant” the terrorists had awakened the politically correct version of nobility.  Our “Lord’s” unilaterally decided that the common man must be contained, controlled.  We were not to be allowed fight evil at its root.  We must be required to be tolerant, even if that required tolerance of the evils of Islam.  After all, our Christian empire was the cause of so many ills from which the world was currently suffering.  September 11th was just our comeuppance.

In their wisdom, our Lord’s determined that the most effective way to fight the terror that had awakened on our shores was to bind the serfs.  The Department of Homeland Security rose to become our savior.  No more would we fear terror.  Islam wasn’t really a threat, it was just misunderstood.  Instead, we would be trained to fear each other. Meticulously, neighbor would be turned against neighbor, state against state and brother against brother.  We were conditioned to spy, question and report any behavior that might be contrary to the governments interests.  Through their one heinous act, the jihadists succeeded in turning our country upon itself, effecting far more terror than any car bomb could possibly achieve.

As the government piled law upon law, act upon act, terrorist were born, simply because they challenged their governments motives and authority.  Returning military personnel become possible terrorists.  Second Amendment advocates were rendered little more than anti-government extremists.  Patronizing gun shows, being affiliated with the “Tea Party”, driving a 4-wheel drive or voting for Ron Paul was enough make you suspect.

As time went on the power of the police, the TSA and the DHS grew while the rights of the people were stripped. Fusion Centers popped up all over the country.  Questioning government became a terrorist activity.  Our government by the people and for the people was transformed into a feudal system with Lords who must be obeyed.  Any questioning was labeled sedition.  Patriots who believed in a strong USA were labeled intolerant bigots.

I am sobered on this anniversary of September 11th.  I am reminded of the tragedy and courage.  But mostly, this day of remembrance signifies the demise of our freedom.  The Lords of our nation found, in the midst of tragedy, the tools required to strip the citizens of their remnant of liberty.  Our freedom, forged in the heat of battle, sustained by the blood of warriors, has been lost to the gods of safety, tolerance and apathy.

The legacy of September 11th is one of tyranny and oppression, not freedom from terror.

Next post The Legacy of September 11th (by Enola Gay)