Law Enforcement & Emergency Services Personnel Indoctrination by FEMA(?) (I cannot confirm the training agency), but from what I understand, this video was taken by an attending firefighter who is a patriot, and was disturbed by what he was hearing in this training session.

Caution:  Hyperbole, by Alex Jones; Jaywalking = Terrorist Activity.  That’s quite a stretch.  There’s enough information out there without having to “stretch” the message coming from these people.  Hyperbole leads to lost credibility.  But Alex Jones has some great (and eye-opening) material that I generally recommend.


Shorter version, but with sub-titles:

Excerpt from the article:
Another common tactic used in DHS sponsored training is the slander of certain ideologies by linking an erroneous characteristic to a particular group. Here are some examples:
Don’t forget about the IDAHO LIBERTY SUMMIT
Idaho Liberty Summit
August 19-21 2011
Challis, Idaho
Contact: Custer County Tea Party

DHS Indoctrination Bleed-over into the Psyche of our local LE?

Palouse Patriot Issue #57 Article: If You Ever Get Targeted ...

“Local police everywhere are being drawn toward “the Feds” and away from the people — this is wrong.”— The Palouse Patriot 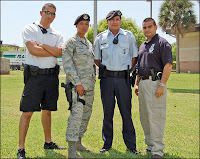 Canadian Troops May Be Used In U.S. In Times of Unrest  Click HERE

Article: How The Police Are Turning Military  by: David Ritgers

OATH KEEPERS: ORDERS WE WILL NOT OBEY

Thank you for keeping your word.  Thank you Oath Keepers!
www.oathkeepers.org